Before I read the book, I was very sceptical because of the words "influence people" which lead you to believe there's some sort of manipulation going on. I didn't like the idea of (probably) forcing people do things I wanted but still I decided to give the book a try. What I later found out is that the only way to influence people is by making them want to do the things you'd like them to do which is adequately described by the author, Dale Carnegie. 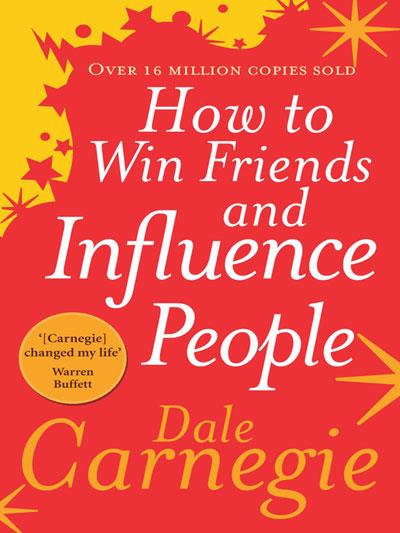 There are 30 rules you need to be aware of:

1. Don't criticise, condemn or complain
2. Give honest and sincere appreciation
3. Arouse in the other person an eager want

4. Become genuinely interested in other people
5. Smile :-)
6. Remember people's name
7. Be a good listener. Encourage others to talk about themselves.
8. Talk in terms of the other person's interests
9. Make the other person feel important and do it nicely

Win people to your way of thinking

As you can see from the rules above, there are no pushy tactics involved. Some of the rules are common sense but how often do we implement them in our daily life? I must admit I have tried a few things myself and they work great. Just the other day, I was in the lift with another person and all I had to do was smile and the other person started talking to me (normally we would just wait in silence till we reach our floors).

The author puts a lot of emphasis on being honest when dealing with people. You shouldn't flatter people but instead give them sincere appreciation and there's a world of difference between the two. Flattery will get you nowhere!

The book has been written in the 1900s and examples are given with reference to people in that era or much before that eg Abraham Lincolm. This can be quite boring and you'll need to understand the point the author is trying to make instead of focusing on the name of the people being talked about. For me, to this day, the examples are valid.

If you've ever read this book, what do you think about it? And if you haven't, how do you find the rules above?

gices Published 16 Apr 2014
Gices Abraham is the founder of Clever Dodo. He's a life coach and advocates the practice of LAM (Locomotion/Arts/Meditation) for a well-balanced and happy life. Born in Mauritius and now living in the UK, he usually blogs about fitness, music, spirituality and driving topics to pass on his knowledge.

warren Buffet... people like or hate me....actually i don't try to 'win' people. I'm good mannered generally. I joke alot and that's it. I don't try to be important in people's life because sooner or later i'll go away

Why does God let bad things happen to good people?

4 replies
844 views
As a spiritual person, will you date someone who isn't spiritual