When I found out FareShare was organising a Neighbourhood Food Collection, I thought it was a great fit for the 5 volunteering challenges I was tackling in November this year. So I got myself enrolled for two shifts at Tesco Metro in Luton, one on Friday the 28th from 6-9pm and the other on Saturday the 29th from 12-3pm. 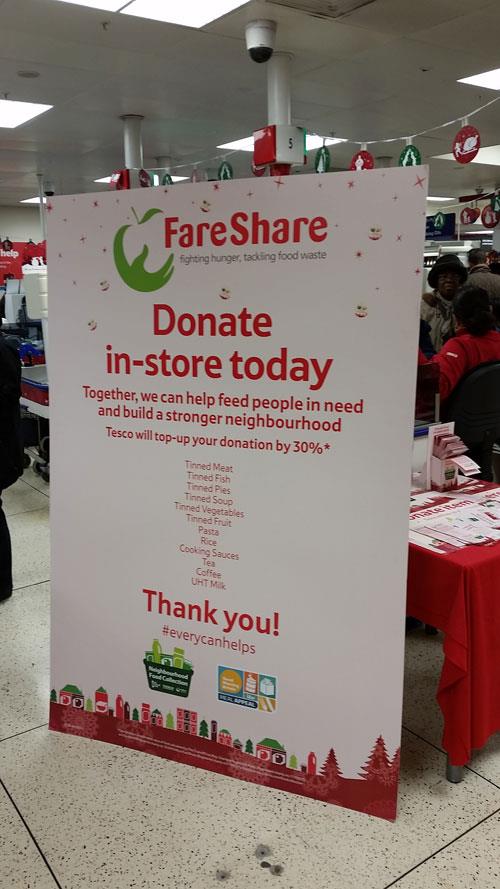 However things did not go as planned because on that Friday, I realised the Tesco Metro was only open till 7pm, something the organisers did not pick up on. I tried to get another shift at Tesco in Dunstable but I was told they were already well staffed. So I decided to just do the Saturday shift instead.

What Happened On The Day

I arrived at the store 30 minutes late because my Sat Nav took me somewhere else. I parked in The Mall Shopping Centre where the Tesco Metro was located and thought the parking fee would be waived off as I was volunteering but it turned out I had to pay £8 after all. Anyway, I didn't realise it was a small store and when I introduced myself to the Customer Services Desk, I thought they would give me a tabard or sash to wear for people/staff to easily understand for what purpose I was there for but they said they didn't have any since they did everything last minute. 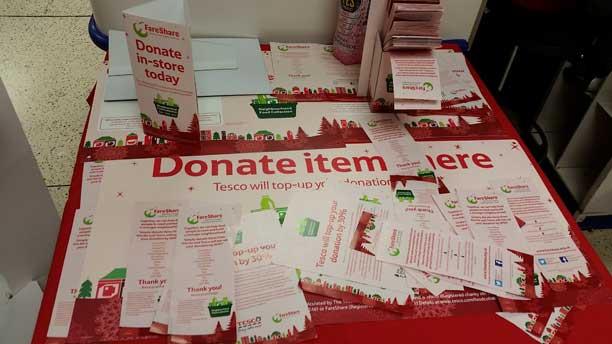 There was one other guy volunteering and he was at the entrance of the supermarket whilst I was placed at the exit because I believe the entrance was too narrow for 2 people. It was actually pointless being at the exit because it is next to impossible to convince someone to go back in, buy food items, queue up to pay for them to give for donation.

Among those many people who came to do their shopping, only a very few of them actually donated anything. It's really heartbreaking when you think about it because a can of Tesco's own brand baked beans cost just a measly 20 pence. The other colleague who was volunteering told me I should target old white women as they were more likely to give anything than others. It was unbelievably true although I had hope others would be more compassionate about people who have to deal with hunger. 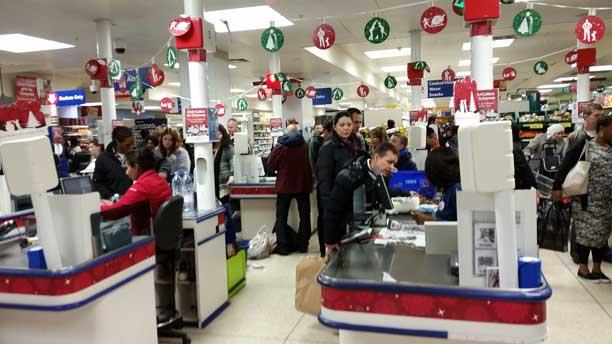 Since there's a big community of Asians in Luton, there were quite a lot of Indian/Muslims doing their shopping but sadly, not a single one of them cared enough to donate something. Being of Asian origin myself, I felt really embarrassed and I started approaching more of them stating "Not a single Asian has donated, please be the first one" and at times I thought I had really convinced a few and I was eagerly waiting for them to come back to me with some cans of food but unfortunately, it was false hope.

When the other volunteer went for a break, I took his spot and it was definitely much better as I was able to hand over leaflets to more people as they come in. I stayed there for at least an hour before we switched places and then I went back when he finished his shift at 3 o'clock. In total instead of staying there for 3hrs, I did a 4hr shift. 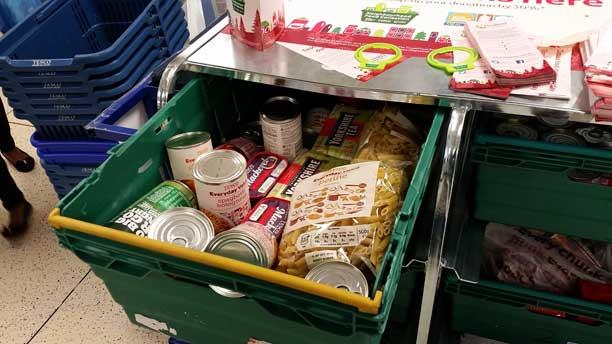 Those Who Made An Impression On Me

Most people cared only about their shopping which is fine as that's what they are there to do, however I'm happy to have met some who've gone out of their way during that event.

She had finished her shopping and when I said goodbye to her at the exit, she told me it wasn't clear where to take the food for collection. When I explained it was all done in store, she was very disappointed as she didn't know that. I reassured her it was okay but she wanted to donate £5 and was so adamant that I take it and buy things for the foodbank. I was very impressed with her and I bought lots of things which the money - 5 cans of baked beans, cans of soup, spaghetti, pasta, sardines etc, a nearly full basket of non-perishable food. 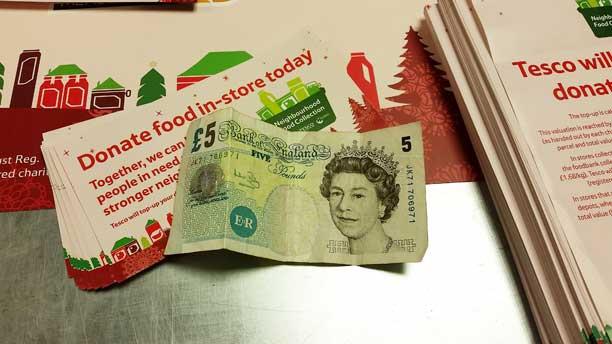 The Muslim Woman Who Donated Her Son's Pack of Chocolates

She thought I was doing food collection for starving muslims but when I told her it was for families who are unable to afford basic food all across England, she reached out in her shopping bags and handed over the chocolate pack she bought for her son. I was moved by her gesture because when people arrive at the exit, they are ready to leave with the things they've come to buy for themselves and it takes a good heart to give up those things, no matter how small they are.

The Middle Aged Woman Who Showed Appreciation For Us Volunteers

When she stopped to give me her donation, she said she really appreciated what I was doing (volunteering) and I must admit it made my day better. As volunteers, we're giving up our time and don't get paid for it and although we already know what we're getting ourselves into, it makes you feel better when people show their appreciation.

First, it really upset me I had to pay £8 parking when I was volunteering - In my mind, the least Tesco/FareShare could do was make sure we didn't incur unnecessary expenses.

[Reason] - I think my expectation was that since I've volunteering, I shouldn't really have any expenses in doing so. You can look at this at different angles but from my point of view, I believe it was up to me to check all of this before I actually committed myself to doing this.

Second, I felt really annoyed people were not donating as much as I expected - It was a Saturday afternoon and the store was packed with shoppers, still there were not so many donations. And if I'm honest, I have to say I was really embarrassed no Asian was donating. I even approached 3 Indian guys who were standing just outside the store and one of them told me he was poor himself as an excuse.

[Reason] - Especially when you're doing a good deed, you expect other people to at least understand this. In your mind, you're like why can't others see the goodness in what you're doing and that irritates you. Having said this, not everyone has reached the same level of awareness and you just have to accept some people are not there yet. With regards to Asians not donating, this is probably because they haven't been taught to do that so they don't know any better.

Third, I couldn't help but feel people perceive me as a low-level staff of Tesco and that irritated me - I've got a good job and I earn more than the average person and it really bothered me as some people kind of looked down upon me thinking I'm this unimportant person trying to sell them things.

[Reason] - This is my ego in its true form. This happened because some shoppers showed contempt in the way they looked at me and that made me uncomfortable and my first reaction was to tell myself how I'm better than them. It is plain wrong as there should be no comparison in the first place and I was there for a purpose whether people like what I was doing or not. So lesson learnt.

Overall it was a great experience. I wished I was at a bigger store though to meet more people. I enjoyed doing this and was wishing shoppers to have a nice day when they were leaving which put a smile on their face. This also helped with my customer service skills.

gices Published 08 Dec 2014
1
Gices Abraham is the founder of Clever Dodo. He's a life coach and advocates the practice of LAM (Locomotion/Arts/Meditation) for a well-balanced and happy life. Born in Mauritius and now living in the UK, he usually blogs about fitness, music, spirituality and driving topics to pass on his knowledge.

Perhaps the lack of enthusiasm is due to the fact that in every corner you might find someone asking for donations nowadays; it's something so common and to which we are so used to that might have turned some people unmovable towards the causes, others simple cannot afford it for different reasons. Fortunately there are still caring people that contribute. It's always more rewarding to look at what was achieved than what it wasn't.

Also why does it make you uncomfortable the way people look at you or what they might think?

Time is very valuable and precious, so thanks for giving these hours of your time to the less fortunate.

I really like the way you reflected on your experiences, identifying your weaknesses however you didn't mention any improvement to be done for self-improvement. hmm..You might learn a lesson, but if you are going to encounter similar experience in the future, how are you going to deal with your feelings and similar situation? It would have been awesome if you mentioned any improvement that you are going to do to deal with all the issues you mentioned. (some people who are going through similar situation might have an insight of how they could improve themselves)

You cannot change other people, their way of thinking. They are not you. We are all different. They might have donated somewhere else already and you don't know their struggles. You can only change yourself and improve your perception, do what you can do to help the world.
It does not matter if they view you as a low-level staff, The low-level staffs are also valuable, they are helping the society in some way. (imagine if they were not here) and I am glad you could pinpoint that your ego is at play :)... I wonder if it has improved or you still feel the same way... Low-level jobs help poor people, they are getting a job.

And honestly, Nowadays...people might think you are wealthy yet you are struggling financially. well for me, Donating is good and I bet among the poor families who are struggling, some might be jobless. What you can do for their happiness would be to make them more independent, find a job for them. Donating is not always good. Finding a solution to eradicate poverty is the way to go!

At last, I am glad that there are still kind people on earth, you don't need to do anything for these families, yet you choose to volunteer to help them, to even get your ego bruised for them, this is very admirable of you. I hope you continue to do so in the future and also don't forget to add the steps you are going to take to self-improve yourself. I look forward to reading more of your writing.

Doing Good Deeds Without Expecting Anything in Return

5 replies
762 views
Helping the Homeless by Giving Food, Clothes and Just Being a Good Listener